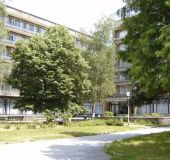 Momin Prohod is located in southern Bulgaria on railway and road artery between Sofia and Plovdiv, in the south-western spurs of the Central Forest. The branch is located in a park...