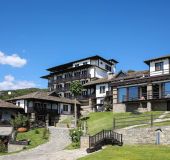 Leshten Hotel is located on the southern slopes of the Rhodope Mountains in the village of Leshten, offering a unique view of the river Mesta and the Rhodopes. The complex is open...