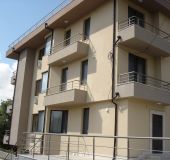 Apartment Lux on the sea, Ravadin...

We offer studios to rent with. The village is situated at the foot of Strandja Mountain and near the sea. Ravadinovo is situated 2 km from Sozopol, beach Goldfish, 3 km Kavatsite, Dune,...